I created my very first website in April 1996 with MicroSoft Publisher. The Internet in the business world was very new and I was keen to be a part of it. It was a single page, with some MS Clipart and my contact details and list of services.  But later that year I began adding more pages, listing my background, providing a newsletter for whomever might read it, list of services and my contact details. Already I was exploring what else I could do with the site.

Are you familiar with the Wayback Machine? It actually keeps archived copies of websites right back to 1996. The first image it captured of my website below is from December 1996. I didn’t have a domain name back then and was using the hosting provided by our Internet Provider (Ozemail) and my username which was kmthom. You can see a copy of it below. Click on the image to go back to the actual image provided. 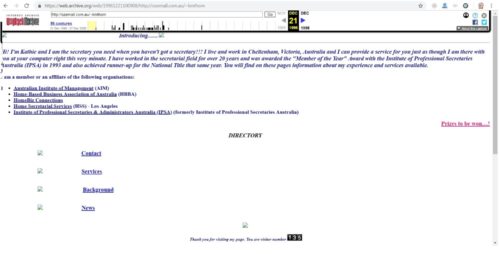 I bought my first domain name in 1998 and paid for hosting separate to our internet service provider account. Was just learning how things worked. The host I registered with was going to purchase the domain on my behalf but missed getting the domain I wanted – even though research had shown it was available. That was asecretary.com. I ended up buying asecretary.com.au and years later the owner of the first actually gave me the domain. 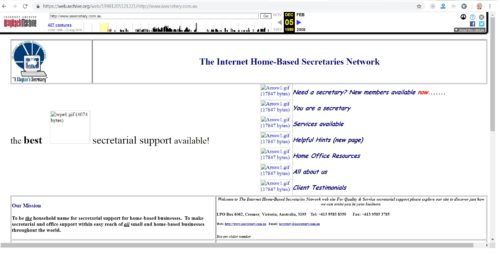 I progressed from using MS Publisher to MS FrontPage, then Dreamweaver and eventually WordPress, which I took up around 2005-6 and have been using ever since. I changed to WordPress because I’d been using Blogger to write blog-posts and realised if something happened to Blogger I would lose the 99 articles I’d written. I had read about installing WordPress and using it not only for blogging, but also for websites so installed that and played around with it and eventually fully built my site in WordPress. But for awhile I still stuck with Dreamweaver and had the blog in WordPress as a sub-folder on the server I was hosted with. I now have over 1,000 blog articles on my website. As you can see, over time, my site has gone through massive changes, based on both the software I was using and trends for websites. I also registered VA Directory in 2002 to bring it inline with my industry and make the name more ‘global’ and current. You’ll see this if you check the Wayback Machine for that domain – it first shows up in September 2002. The name VA Directory very much describes how my business has evolved from being a single operator home based secretarial service in 1994 through to a network of home based operators which now has members in several countries.

Some interesting additional information for you that I’d forgotten till my husband reminded me. The name ‘wayback machine’ actually came from a 1960’s television cartoon series The Rocky and Bullwinkle Show. The series was quite educational for kids of that time (my husband and I being two of them). Wikipedia states: The WABAC Machine is a plot device used to transport the characters Mr. Peabody and Sherman back in time to visit important events in human history.

Here’s some history on the wayback machine site.

The Wayback Machine website was launched in 2001, using a version of that software (read the link for the earlier part of the story).

Since that time, the Wayback Machine has expanded quickly, as has much of the Internet.

The site was named after the WABAC Machine, a time machine used by a boy and his dog on The Rocky and Bullwinkle Show, a 1960’s television series.

I’d completely forgotten about this TV show, which I did love as a child, till my husband reminded me. A bit of trivia that some of my readers might like. You can read about the Rocky and Bullwinkle Show by clicking on the image below. 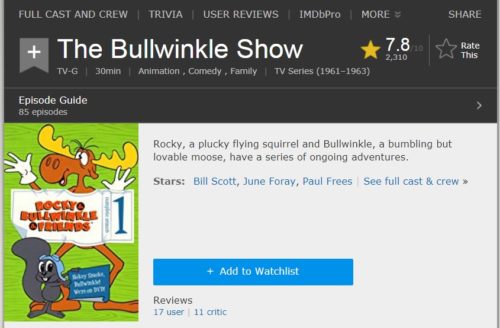 Finally, ever wondered about the very first website? It was published August 6, 1991, and my own less than 5 years later.  You can read about it here, and see a hypermedia version of it here.